Right Now Kizz Daniel is out with a new vibe called “Lie”.

However, this trending dancing song Lie by Kizz Daniel is a follow for his previous drop called “Wedding Day”

Watch out for the video here 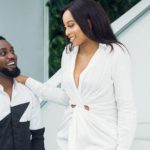